Sunday was another very good day at the Shootout, however, the rain did not quite hold off long enough.

In the U12 Division, the Spirit was matched up against the Saskatoon Lasers in the Final, and had just started the game when the skies opened up, so we have a co-winner in the U12 Division. Sorry we do not have any photos due to the rain and everyone scurrying off the diamond! Congrats on a great weekend for both teams!

In the U14 Division, again the Spirit was matched up against the Regina Saints. The Game was called in the 6th inning, with Melfort in the lead and therefore crowned the U14 Champions. Congrats again to both teams as the Saints had a great weekend as well. 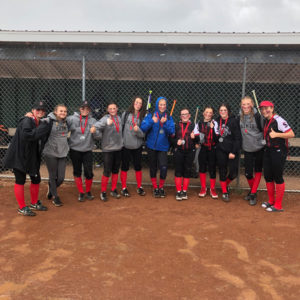 In the U16 Division, we will have co-champions as well. The Hustlers knocked off Lumsden to get into the Final, while The Regina Saints outscored the Edmonton Rivercity Hornets to advance. This was sure to be a great battle, unfortunately, due to the rain the game did not start. Congrats to both the Saskatoon Hustlers and the Regina Saints on being crowned Co-Champions.

Despite the rain that finally finished us off, the Grounds Crew was the MVP of the weekend. We had several parents and coaches come to us with fantastic comments about the condition of the fields. So our hats off once again to Todd Siwak and Curtis Hinrichsen and the rest of the crew on an unbelievable job. Thanks for all your hard work.

We hope to see you all again next year!